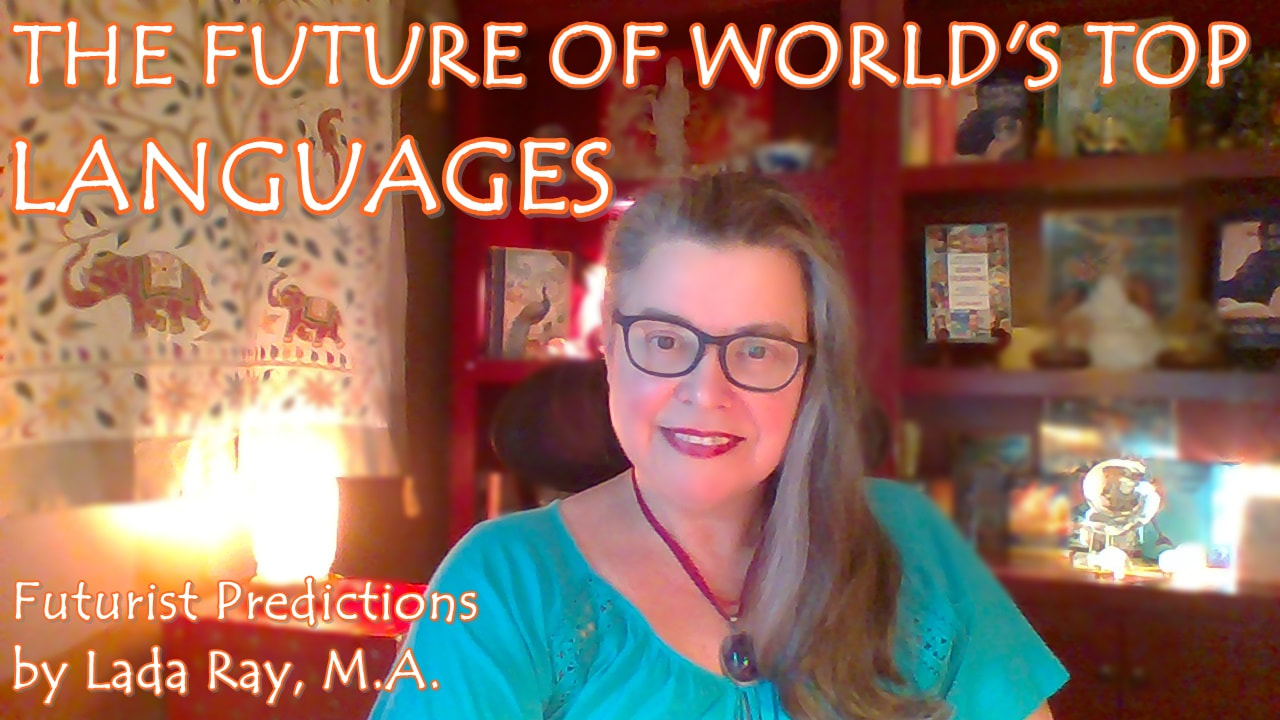 Discussed: English, Russian, Chinese, Spanish, Portuguese, German, French, Hindi and Arabic! Will English continue being the world's top language and what makes it easy? Will Russian again become popular worldwide? Chinese and other languages prospects?
​Also in this event! The official international UN languages and how they came to be; what languages were popular historically and why;
​how  the leading vs. lagging development indicators work; the forbidden history and how Russia-US relations took a tumble through a linguistic mistake; a mini-Russian lesson; Latin, Esperanto and a possible language of the future!

Duration: 49 min
video/audio narrated by Lada Ray, with images
INTRO
​
Languages are a nervous system of the human society. We interact, conduct business, read, write, listen and think using languages!
In our global world, if you know the right languages, you can find better jobs and better places to live; you can be free to travel
​and write your own life's script!

During the monumental Earth Shift and 1000-year Rebalancing the world is going through, how will the languages we speak today change? Will English still be as popular, or will others take its place? What languages should we learn to stay ahead of the competition and thrive?
In our newest event, the linguist, author, futurist Lada Ray, M.A., who speaks multiple languages, looks into the past, present and long-term future of the world's most spoken languages, including English, Russian, Chinese, Spanish, Arabic, and more!
​
In this unique piece, Lada Ray, the well-known predictor of many global events that have already come true, using her spiritual gifts, worldly knowledge and linguistics background predicts THE FUTURE OF LANGUAGES AND HOW WE'LL COMMUNICATE GOING FORWARD!​
​

COPYRIGHT LADA RAY. ALL RIGHTS RESERVED.
​Access for paying special event participants only!
No public reposting or sharing of this Event video or links to this private access page! ​
​​​**This video event makes for a fabulous extension to the Earth Shift Webinars:
Series 5 ​​RUSSIA, EURASIA​ & GREAT REBALANCING and Series 4 ​​LADA RAY FUTURE PREDICTIONS for US, EU & China;
​and precursor to the grand finale: ESW21 TRUTHS ABOUT THE USSR & POST-SOVIET SPACE!
​In Series 2 FORBIDDEN HISTORY & FORGOTTEN ORIGINS you'll find an extended discussion about the forbidden linguistics,
the role of the ancient Vedic Rus/Slavs and what language was really spoken on the planet 1000+ years ago!**