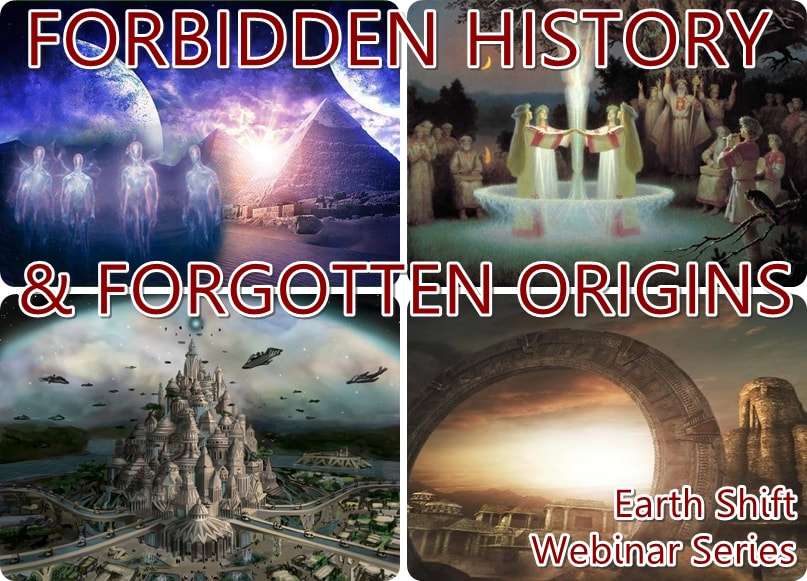 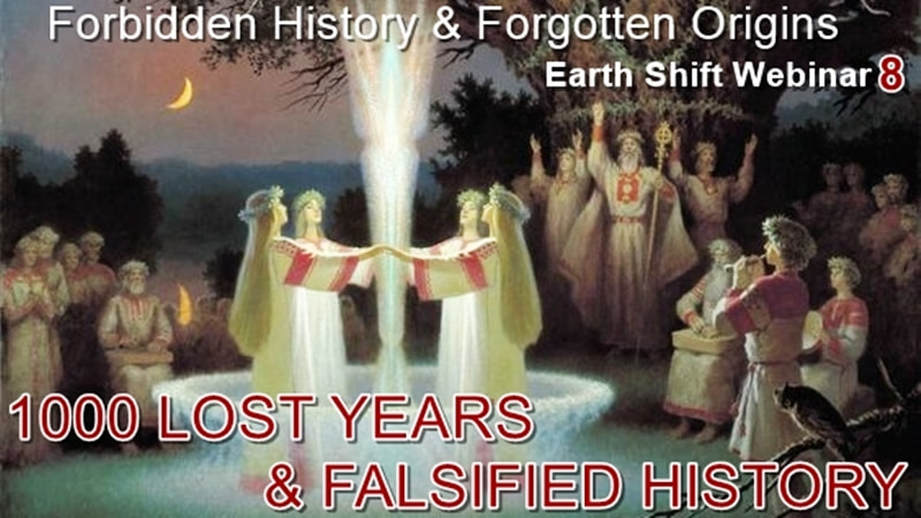 ​WELCOME to Earth Shift Webinar 8! ​​HAPPY WATCHING & READING!​
6-PART MAIN VIDEO WEBINAR
The main video webinar consists of 6 video parts, complete with titles and segment description.
Click on each screen below (the arrow in the center) to watch!
​
​1
​INTRO: The Proof & Clues Hidden in Plain Sight
Higher-dimensional consciousness
What does time look like in 1D, 2D, 3D and 5D
The narrow channel of perception and the loss of the TRUTH
How to climb out of the abyss during th Great Earth Shift
​2
The Russian Vedic Truth & Knowledge Code
What do the words Veda - Vedic - Vedat' really mean?
Proofs in the English and Latin
Ancient Rus alphabets: Bukvitsa, Glagolitsa, Runic writing, Mirror writing and Hieroglyphics
The plunge in consciousness and the great plunder of history
​What are really Indian Vedas, who were Brahmans (the higher Hindu cast), and how they came to be
What are really Cyrrilic alphabet and Latin alphabet
What language did Europe speak in 10th century?
What was (is) really Rome
What was (is) really Europe
Who were really Etruskans, Scythians, Sarmats and Khazarians
​
3
The Slavic controversy & the Key
​Which words were first: Arian, As (Ace, Az), Rus, Russian and/or Slav
What does the word 'Slav' really mean and where does it come from
English words that prove my point
Spanish, Latin, Italian and Russian words that prove my point
What is the Key?
The real origin of the English word 'slave' and how it came to be
Does 'Slava' really mean 'glory'? What is the real meaning?
Where do Slavs still live today
4
The real truth about Jerusalem, Constantinople, the Third Rome and Another Christ
Falsified history: Jesus, Radomir and Ryurik
​​Prof. Chudinov's Geo Linguistics; Vedic scholar, Prof. Svetlana Zharnikova
Flying machines and Russian geogliphs all over the world
What was Arkona and where it was located
What is really Tarot, where it comes from (archaic, archeology, archives, archons, tarot, major and minor arcanas, Torah, translation)
Who was Radomir
Third Rome and the Man Named Ryurik Who Tried to Unite the World
The Normanic theory, French Queen and mother of the French from Kiev, and much more...
5
New Chronology:
How Russian History was shortened and Western/ the rest of the world's lengthened
​​Fomenko and Nosovsky's New Chronology - proofs by means of the cross-section of mathematics, archeology, anthropology, astronomy and modern computer programing
The fake antiquity, Rome and Egypt
The Vatican, the West and the reversal of truth
Wholesale rewriting of history between 16th and 19th centuries
Hunting down and destroying artifacts and documents in Russia, Europe and Asia
Why Hindu Vedic documents survived
Witch hunts: the Vedics, witches, wizards and the wise ones

*** I am inviting you to find more proofs and examples in other world languages - these proofs you'll find in your native language are the ancient echoes of truth, most of which have been erased as languages and human tribes diverged through time and space.

We have discussed a lot during this second webinar in the FH&FO series. However, there is still so much material I wanted to cover, but didn't get the opportunity to do so! Due to time restraints, I was unable to cover several extremely important and fascinating topics. Among them:

1. These days some question whether the crucifixion of Jesus took place at all. They are not wrong to question, because it appears that if it did, this act occurred in a completely different place and time, and to a completely different person. I showed you some paintings, and I explained how the legendary figure of the mystical Jesus was in my view a composite of not two, but three, real people; I told you about the true identity of the 'other Jesus,' when, why and by whom he was executed. But there is more to the story, and additional proofs I possess are even more sensational and striking. In a future webinar I'll have a separate episode, along with fascinating centuries-old proofs of the true location/timing of the real Jesus's crucifixion!

2. In this webinar I spoke to you about the Rus/Arian mystical goddess of life and rebirth Mara and how some contemporary words in various languages originated from the association with this goddess. But there is something I didn't have time to cover in this webinar. It is the perennial mystery of Leonardo da Vinci's Mona Lisa and her unusual smile. The painting, considered the most famous and expensive in the world, has fascinated and perplexed generations of experts, historians and fans. I will unveil this mystery in a future webinar!

3. There are additional linguistic and historic proofs I didn't have time to cover in this webinar, and they are equally fascinating. Time permitting, we'll return to them.

4. I hope you all enjoyed the Lada Ray syllable word-building system! This system is the only one adequately proving the connections and origins of words in our languages! Something is telling me we'll be returning to it over and over!

5. In this regard, please check out the 3 slide shows I created for you below! They'll help you recall what we discussed, and they'll focus your attention. Some of the slides below are new - the were not included in the webinar! I have ideas for more slide shows in the future - hope to share them with you soon!

HEADS UP! I know many of you can't wait for the upcoming webinars in this series. I admit: the sheer huge volume materials in the Forbidden History topic has been underestimated by me. I will do everything in my power to cover as much as possible, while releasing the webinars as soon as possible!
The following webinars preliminary schedule:
I plan to release ESW9 (FH&FO #3) on May 10.
I also plan to release ESW10 (FH&FO #4) in the end of May or beginning of June.
Updates and finalized release dates will be posted on your Series Access Page and WEBINARS info page.

Please start thinking and preparing your webinars-related questions, should you have any. I will answer them all during PART 2 of ESW10. I am allocating about 1 hour (depending on the volume of questions, we'll go to up to 1.5 hours) to the Q&A. After ESW9 goes live, you'll be able to send me your questions via email or post them on Patreon. Please wait for my special announcement to begin sending your questions!

I also welcome your feedback and reviews, on FT and Patreon!

Please stay tuned and I can't wait to see you in our future webinars!

SLIDE SHOW 1
Veliky Novgorod
Veliky Novgorod, or simply Novgorod, is the city that played a significant role in early medieval Russia, preceding Kiev as the Eastern Rus capital, between at least 5th-8th centuries, and apparently much earlier. Later the capital was transfered from Novgorod to Kiev by Knyaz Oleg. A relatively small city in today's Russia's north-west, Novgorod is one of the oldest surviving Eastern Rus cities, and a cradle of one of the earliest forms of direct democracy. It is featured in ESW8 and its name is very telling: Veliky Novgorod means 'The Great New City.' This, at the very least, speaks of the fact that there were 'great' and 'small' OLD cities in the region, when Novgorod was founded as a promising trade capital before 5th century (could be significantly earlier). This yet again dispels and shutters the official history, insisting on shortening Russian history to the mere 1000 years (the latest thing I heard: the history of Russia is suddenly officially recognized as being 1500 year old - still a lie, but a movement in the right direction, albeit meek and unsatisfactory).
​
​SLIDE SHOW 2
​FOMENKO/NOSOVSKY NEW CHRONOLOGY
Fomenko / Nosovsky New Chronology proofs gathered in one place - a great refresher!
​SLIDE SHOW 3
CHUDINOV'S GEOGLIPH PROOFS & FORBIDDEN LINGUISTICS
​I collected in one place various forbidden linguistics, Russian language, Bukvitsa, Rus Runes, Etruskan and Chudinov geo linguistic slides -- various proofs, which have been presented to you throughout this webinar. Plus, some additional images. A great reminder and food for thought!
FRIENDLY REMINDER!
​ ​​Please save the URL of this page (or bookmark it) for future reference at your convenience!
(Please note that this is the only way you will retain continued access to this webinar page!)
Copyright Lada Ray April 19-23, 2018. All rights reserved.