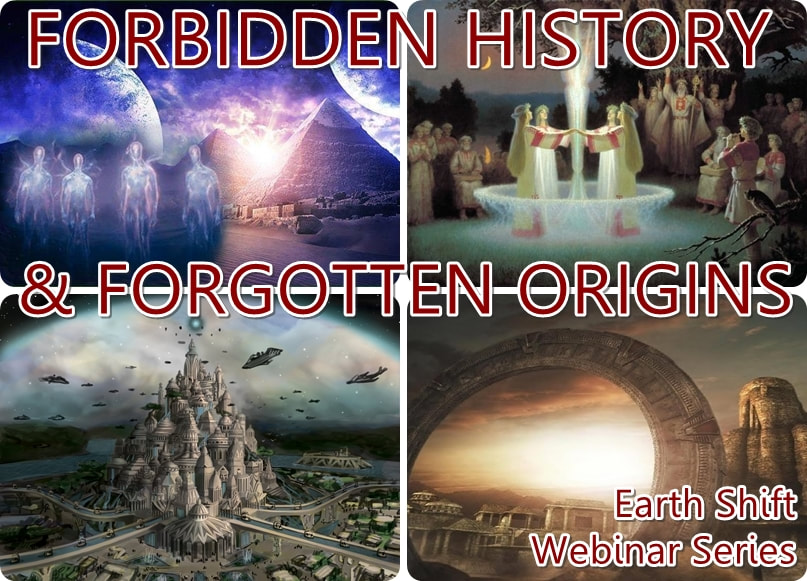 ​This is an MP4 VIDEO Webinar

At the outset I want to emphasize something very important: The Forbidden History 4-Webinar series is created to provide a system of cutting-edge multidimensional knowledge and understanding. It is emphatically NOT a tool for aggrandizing or demeaning any culture.

We take the high road; we do the opposite of those who falsified history to divide people and for their own gain. We reveal the truth and bring it to light. Through allowing ourselves to see a vastly different picture of the past than depicted by official history, we are also given an amazing opportunity to understand how close we all really are.

Today's cultural diversity holds a crucial key to our true origins, and a small but treasured piece of this key was once handed by the Earth Keepers and Wise Ones to each and every culture.

We just need to learn how to discover this hidden in plain sight piece of the puzzle, and how to put this precious key back together.
This is the most important lesson, and this is the main 3D paradox!
And this is exactly what we are doing through my Forbidden History & Forgotten Origins Webinars!

During our journey together we've learned a lot, and we'll continue on this road less traveled! Earth Shift Webinar 10 is the longest & most substantial of the 4-webinar series. Due to the Q&A, which in itself is a separate webinar altogether, it consists of 2 major Installments.

SEG 1
The start of the Galactic Night and its dates: the Darkness energy dominates
Galactic Dawn and its dates: the Ra energy dominates
The Time of the West & the Time of Russia and China
SEG 2
The Great Medieval Earth Shift and its consequences
Why history was re-written?
SEG 3
Lada Ray explains how the 3D Paradox & world cultures work:
Separation, contrast, tangible human experience & the expansion of universal consciousness​
SEG 4
Did Aliens and Reptilians interfere or did humans achieve a self-fulfilling prophecy?
Eternal Questions: Can human karma be worked out and what will happen next? What is humanity's future?
SEG 5-6
​TWO FASCINATING BONUS VIDEO PROOFS:
The Mystery of Da Vinci's Mona Lisa ​
Where is the real site of Jesus's crucifixion (The Radomir Proof)?
(Warning! It's not what and where the pop culture makes you believe!)
SEG 7
Prophecies and Predictions: The Ringing Cedars' Anastasia, Baba Vanga and Edgar Cayce
How these prophecies go together with everything we discussed in our webinars, and how they confirm Lada Ray's Earth Shift Theory
SEG 8
Lada Ray Prophecy
SEG 9
Bonus Slide Shows & Quantum Calibrations!

There are altogether 10 segments in the first installment!

In the extensive Q&A session I answer many excellent and poignant questions submitted by my early series subscribers, and I thank you for that! The Q&A is where we can dive deeper and breach broader into various Forbidden History & Forgotten Origins subjects! We can zero in on topics of most interest to you and clarify any points, requiring extra touch. I've enjoyed answering your questions, which I think have become a truly amazing addition to ESW10, and the whole series! Our Forbidden History Q&A will enrich your whole experience - don't miss it!

Through this unique and all-encompassing series I am giving you unique tools for recognizing in your own culture, history and language what the official history and linguistics has missed. You can take the knowledge you found here and expand it, as well as share it with others.

The Great Medieval Earth Shift and its consequences
Who and why shortened Russian history and lengthened Western history? Why history was re-written?
​
3

Did Aliens and Reptilians interfere or did humans achieve a self-fulfilling prophecy?
Eternal Questions: What will happen next? Will falsified history ever be rectified? Will truth prevail? Can human karma be worked out? What is humanity's future?
​
5-6

TWO FASCINATING BONUS PROOFS:
1. The Mystery of Da Vinci's Mona Lisa ​
2. Where is the real site of Jesus's crucifixion (The Radomir Proof)?
(Warning! It's not what and where the pop culture makes you believe!)
​
THE MYSTERY OF MONA LISA
​THE RADOMIR PROOF: WHERE WAS REALLY JESUS CRUCIFIED?
7
​
Prophecies and Predictions: The Ringing Cedars' Anastasia, Baba Vanga, Edgar Cayce
How these prophecies go together with everything we discussed in our webinars, and how they confirm Lada Ray's Earth Shift Theory
​
8​
Lada Ray Prophecy
​

As the new 21st century and new millennium begin, the darkness of the Galactic night is replaced by new light of the Galactic Dawn. With that, the new Great Earth Shift begins. The Medieval Earth Shift, rebalancing the energy from East to West, was an intermediary Earth Shift which has run its course. This new Earth Shift is much bigger than that. It has been millennia in the making.

It is during this time that the energy of the collective consciousness on the planet, which has been falling from 5D to 4D and then to 3D and even below, begins reversing. The whole 20th century was a preparation for the Great Earth Shift, which will last for another 100+ years. After that, humanity will settle into new reality. Is there still a possibility mankind can blow itself up? Yes, there is a small chance still, but I am feeling more optimistic now than I did several years ago.

However, we have to continue working on it. The energy must rise -- mankind's consciousness must rise -- if humanity is to have a long and prosperous future.

Many higher consciousness cosmic and earthly beings are here, helping this transition and watching with much interest what is happening now on Earth! Our Gaia has become a final frontier of the development of consciousness in our universe. This human civilization has a part to play in that, through its trials and tribulations - and that's another 3D paradox.

As the rays of the new light -- the Ra -- illuminate the Earth, they gradually bring clarity, knowledge and truth. The darkness subsides and more people awaken. The early risers will then awaken others.

This Earth Shift is like none before it on human or galactic memory. For the first time ever humanity is given an amazing opportunity to rise its consciousness back to the 5th Dimension, how it was originally designed!

As the consciousness on the planet rises again, this time Russia the Great Balancer is also rebalancing away from the West in a new and higher-consciousness way! Unlike past rebalancings, when either North, West, East or South dominated, this is a balanced and equitable act. After this rebalancing is complete, after Russia the Great Balancer and Putin have done their jobs, we will live in the world where not one part of the world has a special and unfair advantage over another. This is why I call it 'the yin-yang rebalancing.' The signs of this are already becoming prominent in geopolitics and international human activity.

As any huge change and any tectonic shift would, initially the Great Earth Shift feel disorienting and confusing. But this is a necessary first step. There will be more such steps and they will result in a monumental and necessary change!

If you are listening to this, you are ready for it and you are here to play an important part!

We live in amazing times. We all chose to incarnate at this time to facilitate the Great Earth Shift.

Bonus Segment 10
SLIDE SHOWS!
ARCTIC RUS - HYPERBOREA
This slide show goes with WEBINAR 7 (FH&FO # 1). It was in this first webinar where we discussed Arctic Rus - Hyperborea!
Many of these gorgeous images are from paintings by Russian vedic artist Vsevolod Ivanov. The fantasy images he depicted are in fact his memories of the true past...

LADA RAY FORBIDDEN LINGUISTICS CHEAT SHEETS
Slide show 2 goes with WEBINAR 8 (FH&FO #2). In it we delved deep into the forbidden linguistics, to uncover the hidden in plain sight truths of falsified history & our true origins. I call the slides you'll see below 'The Forbidden Linguistics cheat sheets.' You had the opportunity to study them all in Webinar 8. This is a refresher course - to hear my complete interpretations and explanations, please review EARTH SHIFT WEBINAR 8: ​1000 Lost Years & Falsified History!
​Bonus Segment 11:

QUANTUM CALIBRATIONS for ESW7, ESW8, ESW9, ESW10 & whole FORBIDDEN HISTORY SERIES!
For the first time ever I am including 4 values!

You may recall that we've earlier calibrated ESW7 and ESW8 on Patreon! Also on Patreon we calibrated Webinars 1-6 and entire Multidimensional Geopolitics Series.
This is the first time we are calibrating ESW9 and ESW10 and the whole Forbidden History Series!

Here, I'll calibrate live, as I usually do.

LEGEND
This time we will be calibrating more. For all my webinars, books, blogs, ideas, theories, etc., which I plan to calibrate for you going forward, I will include the following 4 values, which will provide additional dimensions and foster a deeper understanding:
QC - cosmic energy quantum calibration
CHI - earthly manifestation
HC QC - heart chakra calibration
TLT - the level of truth (this new calibration is paramount for any written or spoken info and teachings!)
If you are not familiar with my base QC Scale, please go to QUANTUM CALIBRATIONS. The most updated full QC/GC Scale is available in ESR17 and through my personal written Multidimensional Report (see  PRIVATE CONSULTATIONS). Eventually, it will also be available in my book.
________
To digress into the topic of ESW8, where we discussed the underlying structure and message of many words in various languages. For that we used my syllable word-creation/word-building method. Do you notice what I notice? Look at the word PARAMOUNT!
Po-Ra-Mount:
po-ra = according to light / truth
mount = height, importance, ranking
MEANING: How important and significant something is based on (from the perspective of) Ra / truth / light
________


​**Important! These are live calibrations, which are news for me as much as for you!

**We consider this Forbidden History Q&A an extensive PILOT to the upcoming
LADA RAY LIVE PATREON Q&As, which will be a new reward for Lada Ray Patrons (coming soon)!

FORBIDDEN HISTORY Lada Ray Q&A - Segment 1 (Q&A 1-9), 1hr 21mins
Questions:
1. Resources & learning more about the discoveries of Russian scientists (more of Russian scientists' discoveries discussed below!)
2. Time in higher dimensions, the forbidden history of Australia and Lemuria
3. Benevolent or harmful: who and what are Aliens, Reptilians, Dragons and ETs?
4. When and how does the Cosmic Karmic Mechanism turn on? How to recognize the signs (with reference to The Earth Shifter)?
​5. The forbidden history and forbidden linguistics of China
6. Were there witch hunts in Russia (staroveri - old believers)?
7. Secret origins of Norway and forbidden linguistics of Norway and Oslo
8. Forbidden history in famous books and film & the lost city of Arkaim
9. When will Antarctica pyramids & UFO proofs come to light?
FORBIDDEN HISTORY Lada Ray Q&A - Segment 2 (Q&A 10-18), 1hr 08mins
Questions:
10. Danish proof: 12th century destruction of the Vedic holy city of Arkona by Danish knights & the true meaning of the Slavic god Svetovid, the World Seer and Truth Knower
11. Who was Jesus & was he involved with the Earth Shift?
12. Falsified history of the Roman Empire
13. The truth about the origin of Latin language
14. How did the Tarot cards survive the inquisition & how true are contemporary decks to the Vedic original?
15. What caused the consciousness plunge to 2D & 1D, and how can consciousness rise again to 4D & 5D (with historic examples)
16. What really caused the Crusades, and what were the Crusaders really after?
17. Was the mass murder of the Cathars by the Catholic Church an act of consciousness plunge to 1D?
18. The truth about the Knights Templar and their real role
​FRIENDLY REMINDER!
​ ​​Please save the URL of this page (or bookmark it) for future reference at your convenience!
(Please note that this is the only way you will retain continued access to this webinar page!)
Copyright Lada Ray June 2-6, 2018. All rights reserved.