Please bookmark this page or save its url so you can return to this report in the future!
​ 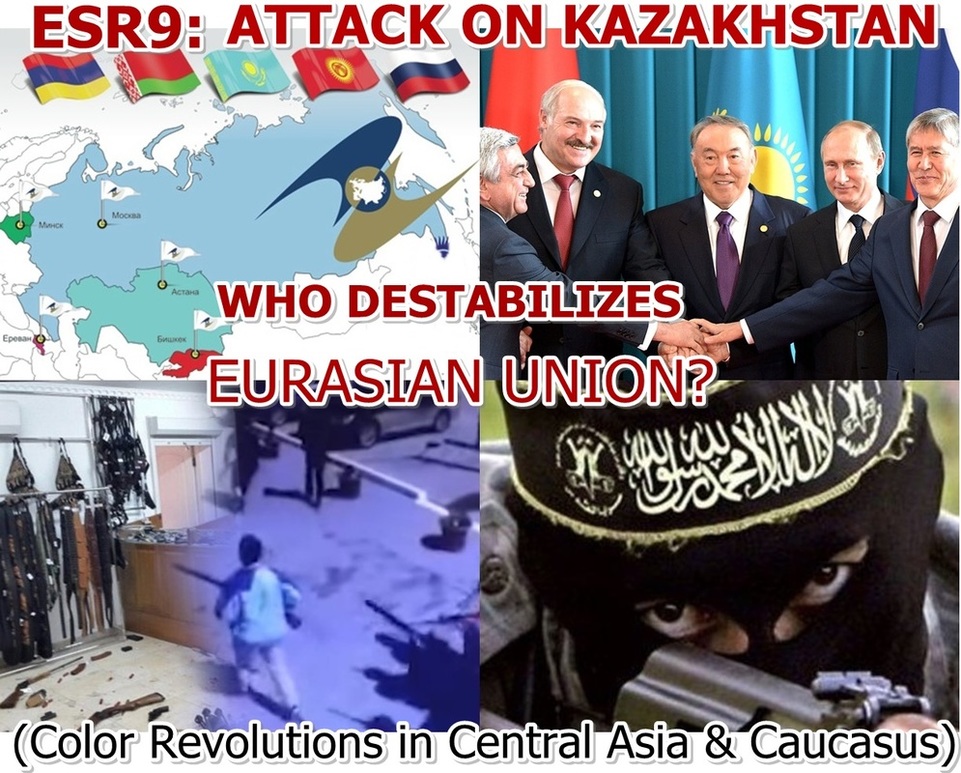 NOTE! These videos, password, and this page (as all Earth Shift Reports, past, present and future) are Copyright protected! No video shares or password shares! No video embedding, reposting or direct page-linking! In order to encourage others to watch this comprehensive report via donating, please share general EARTH SHIFT REPORT page! Thank you for your cooperation!
NOTE! Password is subject to change! You may always return to this page in order to learn new password!

HOT TIPS:
1. Please make sure you bookmark this page (or save url), so you can return to it in the future!
2. Videos default to 360P. If you have high-speed Internet, activate HD quality by clicking HD button in the right corner of the video's bottom bar. This will greatly improve your viewing experience.
3. If you wish to view videos on full screen, click on 4-sided expansion arrows in the right corner of the video's bottom bar. ​
For your ease of viewing and bookmarking convenience, this one of a kind comprehensive report by Lada Ray
​has been divided by topics into 6 narrated segments + 2 short documentaries.
Lada's narrated segments range is size from 16 to 46 minutes. They include illustrations, maps and pictures, which enrich your experience and allow you to orient yourself better in the sea of information.
Two mini-documentaries, Lada has created exclusively for this report are 7.5 and 13 minutes in length.

NOTE! These videos are hosted on secure Vimeo servers and are password protected!

Explained: Kazakhstan's Land Reform and proposed sale of agricultural lands to foreigners as the pretext to ignite tensions and set population on fire (recall Kiev Maidan slogan of 'getting rid of oligarchs and corruption.')
China's supposed involvement.
How I see it: the real situation with China vs. hyped-up fears.

Who is really behind this color revolution: Soros, US NGOs (Endowment for Democracy, USAID, etc.), social media IP addresses traced to the US.
Ukraine, Turkey and ISIS involvement.
How it was done: no apparent leaders - most subversive 'news' and announcements made via YouTube, Twitter & Facebook. Molotov cocktails, subversive literature, money, weapons, vodka stashes.

On the border with Russia: Why Kazakhstan's fastest growing city of Aktobe (Aktyubinsk) was chosen for terrorist attacks on June 5, 2016. I put you in the middle of the action and explain in detail, with maps and specifics, why.

The attack on Pallada gun shop and killing of the Russian-Ukrainian salesman, plus the mourning and funeral - with pics.
​Attack on the military/national guard barracks, bus hijacking, etc.

Why was specifically Kazakhstan, with its stronger military and central power, singled out for the color revolution and terror attacks? Why not a weaker Central Asian state such as Kyrgyzstan or Tajikistan?

How Russia is key to everything that goes on the region: all about Russia's interests, involvement, role and more.
​
Hot Central Asia intel: the real situation in Kyrgyzstan, Tajikistan, Uzbekistan, Turkmenistan.

​My mini-documentary 1: Foiled Color Revolution in Kazakhstan (no password needed!)
​
Footage includes security op by authorities, arrests and found weapons (cut metal rods, grenades, Molotov cocktails), subversive literature, vodka, money, etc. This is a part of the documentary aired on Kazakh central TV. It directly names the culprits of the color revolution attempt: Soros, Endowment for Democracy, USAID and other US NGO's, as well as US government. Other connections named in the documentary are: Ukraine's fascist 'right sector', as well as Islamist fundamentalists and ISIS. Kazakh president Nursultan Nazarbayev announced that Kazakhstan 'won't allow 'Ukraine Maidan' scenario in the country,' thus indicating he knew very well from where the wind blew and was prepared to deal with it.

​Complete, packed with action, on-the-ground coverage of what went on on June 5 in Aktobe. Several terrorist groups were involved, some of which attacked 2 gun shops, others - the military installation, yet others hijacked a bus with hostages and a police vehicle.
Panic in the city: note that this amateur footage was shot from different vantage points from lay people's windows, balconies and from ground level. The whole thing is especially troubling because everything is happening in densely populated areas, where civilians could have been easily hurt, which, thankfully, didn't happen.
The footage shows the gunmen, attack on gun shop Pallada, the hijacking of the bus with hostages, etc. The opening footage was uploaded on YT by the terrorists themselves. It shows them in one of the hijacked vehicles, being chased by and shooting at police. ​

President Nursultan Nazarbayev's tough response: we won't allow 'Ukraine scenario.'
Authorities' reaction to the color revolution and Aktobe attacks.
What was used as a pretext for riots.
Kazakhs aren't fooled as to who's really behind color revolution attempt.
Police, intelligence and national guard preparedness & actions during attacks and color revolution.
Russian advice.

The issue of the Russian-speaking, Christian population (Russians, Ukrainians and Russian-Germans).
Past problems and what's happening now.​

Part 4: Complicated Game: War against Russia.
Russia as Global Balancer ​& why Kazakhstan is so important to Eurasia
​​
This part contains my brand new EARTH SHIFT MATERIAL, never previously discussed in public!
(Read about EARTH SHIFT SYSTEM and Russia as the Great Balancer!)

​How the global seesaw works.
Russia's role as Global Balancer & Stabilizer - explained in pics & examples.
Why those who want to keep the world destabilized desperately need to do away with Russia.

COMPLICATED GAME:
Rocky relationship and falling out: US Empire vs. globalist elites (yes, you've heard me right!).
US – the globalist elites' super-tool gone rogue.
War on several fronts and the breakup of the old world structures.
Would globalist elites actually prefer Russia to get stronger to curb US appetites?

​Russia/EAU-ASEAN Sochi Summit and how it's related to the timing of Kazakh events.
Why did Putin go to Astana? Real reason EAU leaders gathered in Kazakhstan just after the foiled color revolution.

Eurasian Union, its development, goals & global role.
Who wants to prevent EAU from being built and why difficulties should be expected.

4 War vs Russia. Russia as Global Balancer & why Kazakhstan is so important to Eurasia from Lada Ray on Vimeo.

Armenia's many problems. One of the two newest EAU members and four attempts at Armenia destabilization.
Full analytics: Electric Maidan, anti-president Sargsyan protests and a change to 'parliamentary republic.'
Karabakh war and Russia-Armenia relations.
4 day April, 2016 Nagorno-Karabakh war between Azerbaijan and Armenia - qui bono?
Russia's role in quelling the conflict.
How Putin played peacemaker between Armenia and Azerbaijan and why Armenians are peeved at Russia.
LA connection - who influences Armenia?

Azerbaijan: which way now: Russia vs. Turkey/ US? Prospects for joining EAU.
​Georgia: US patsy. Will there be changes?

PLUS: let's return to Central Asia.
On the border with Afghanistan and Pakistan: Tajikistan's precarious position.
Republic or monarchy? President Rakhmon wants to pass his power to his son.

By this Treaty Armenia has become a part of the Treaty on the Eurasian Economic Union, signed by the Presidents of the EAEU Member-States - Alexander Lukashenko, Nursultan Nazarbayev and Vladimir Putin on May 29, 2014 in Astana, as well as other international treaties forming the EAEU legal framework. From now on, Armenia undertakes corresponding obligations, and therewith gets access to the EAEU single market with 170 million citizens. By joining the Eurasian Economic Union, the state gets fully involved into implementation of the Eurasian project aimed, on the one hand, at forming of four freedoms: free movement of goods, services, capital and labour force. On the other hand, - at creation of one of the key economic centers of evolving architecture of the multipolar world.

The fourth partner expects a number of positive effects form integration. Among the key ones there are an  increase of goods turnover due to elimination of barriers and minimization of administrative expenses, an increase of mobility of labour force due to introduction to the single labour market, an increase of stability of economic development due to reduction of economic isolation effect, development of infrastructure projects, participation in drawing up of the agenda using the mechanisms of the Eurasian Economic Union.
​
The Treaty on accession provides for full involvement of Armenia’s representatives into the activities of the EAEU governance. Upon entry of the Treaty into force the President of Armenia becomes a full-fledged Member of the Supreme Eurasian Economic Council, and the Prime Minister becomes a Member of Intergovernmental Council; the full-fledged representative joins the Eurasian Economic Commission. Armenia will be represented by three Board Members in the Board of the Eurasian Economic Commission, as well as other EAEU Member-States."

Lada's notes: As of June 11, 2016, EAEU has 5 full members: Kyrgyzstan joined EAEU in May 2015. Tajikistan is next in line.
Maps of EAEU and membership info are included throughout ESR9 videos!
​ 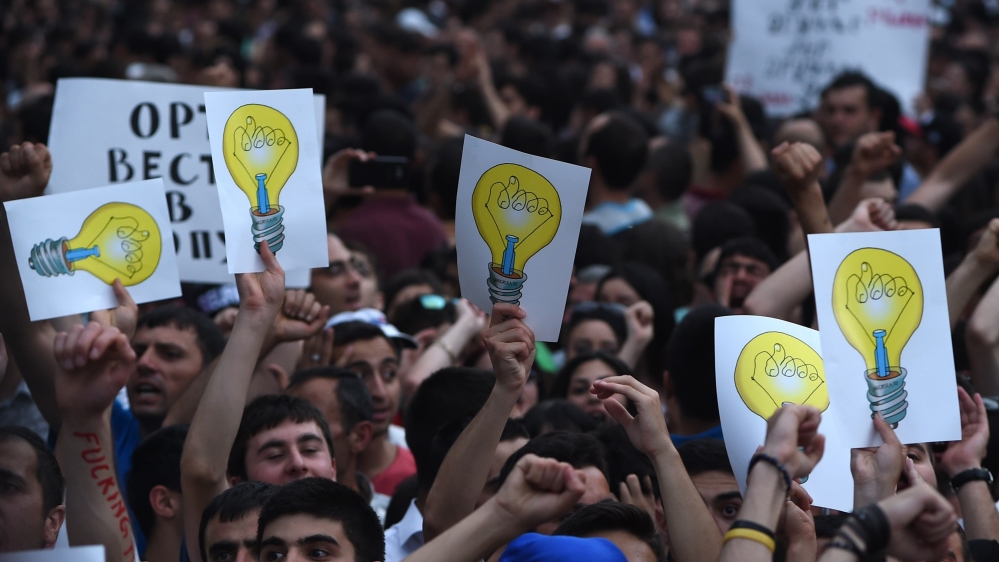 Armenia 'Electric Maidan.' Between 2014 and 2016 it was one of the 4 very serious attempts to ignite color revolution, instigate regime change and put a rift between Armenia & Russia/EAEU.
​Remember: the mega-goal, the primary target and the biggest prize is ALWAYS RUSSIA!
US cannot allow the very possibility of a multipolar world!
​So, on January 2, 2015 Armenia officially became a member of Eurasian Economic Union (EAEU). Before that happened and ever since, there have been relentless attempts to destabilize Armenia by all means possible.

I have been warning about it since 2014.
Following a successful subversion of Ukraine by the US, all post-Soviet space leaders, as well as many other heads of state, have been on high alert, knowing they could easily be next, and their country could be plunged into chaos and bloody war just as easily.

Armenia, due to its isolated and vulnerable geographic position, weak leadership and poor economic situation was the primary target. Since then, four very serious attempts to introduce color revolution, war and chaos were made in Armenia.

1. A false flag 'killing' by a Russian soldier from the nearby military base of an Armenian family: needed to compel Armenia to boot out the Russian base - the only protection Armenia has against Turkey, its eternal enemy.

2. The so called "Electric Maidan," during which electric rates hikes were blamed on Russians (who else?), and where Ukrainian nationalists tried to infiltrate protests.

4. The latest: April 2016 4-day Nagorno-Karabakh war between Armenia and Azerbaijan - quelled almost immediately due to Sergey Lavrov and Russia's prompt peacemaking efforts, resulting in renewed truce.
This attempt aimed at destabilizing both Armenia and Azerbaijan, and at creating an additional rift between Russia and Armenia.
Further, it was designed to push Azerbaijan away from Russia and closer to Turkey and radical Islamism.

And what an interesting coincidence! The Nagorno-Karabakh conflict escalation happened DURING the visit of both heads of Armenia and Azerbaijan to the USA, where they attended Nuclear Summit hosted by Barack Obama!

Incidentally, did you know that 160,000 Armenians reside in Los Angeles, USA (the largest Armenian enclave in North America) and that George Clooney is Armenian? ​​ 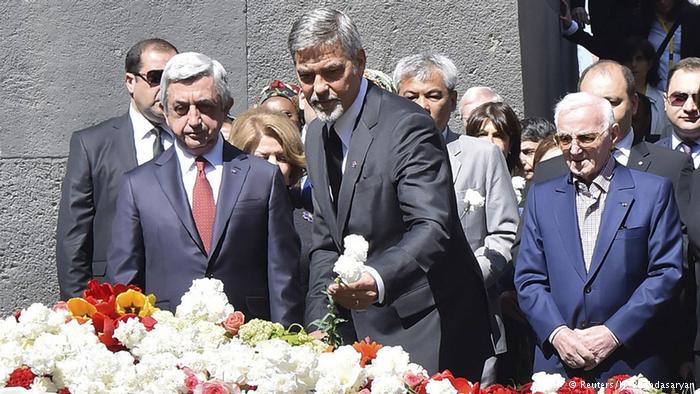 Much more hot intel, pics & maps, analytics on clandestine ops revealed in PART 5 below!
To find out how Russia, Putin and Lavrov successfully dealt with Armenia, Karabakh & Azerbaijan problems & how the volatile situations were reversed, listen to Lada Ray's report:

6 The Devilish Poker. Wrap-up & Conclusions from Lada Ray on Vimeo.