​Please bookmark this page or save its url so you can return to this report in the future! 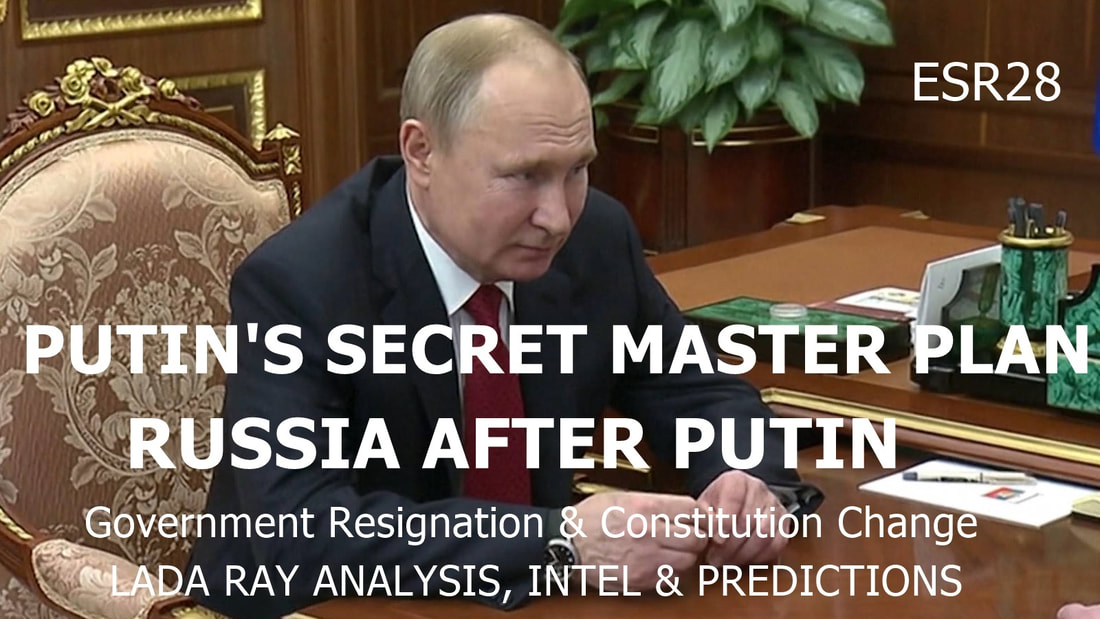 Medvedev government resignation. New meritocracy government. New Constitution!
HOW PUTIN'S QUIET JANUARY REVOLUTION WILL CHANGE RUSSIA & THE WORLD:
LADA RAY ANALYSIS & PREDICTIONS​
​This all-encompassing 4-PART Mega-report is a combo written & video/spoken​
SUMMARY
​
We'll discuss:
The long-awaited changes to the Russian constitution; Putin voluntarily diminishing the powers of the president and limiting his term; surprise resignation of the old government and Dmitry Medvedev; new government led by the unlikely tax man; major support of poor families and families with kids; the living wage increase; and strengthening the parliament's (the Russian Duma) powers.
How the political and economic structure and policies of Russia will change and what is Putin's real master plan? Who will replace indispensable Lavrov and Shoigu? What will happen when Putin leaves in 2024?
All that and much more in this 4-PART WRITTEN AND VIDEO SERIES! I'll dispel silly rumors circulating in the West and give you in-depth, up to date real facts, analysis and my special Earth Shift and the Time or Russia predictions!
​
The move is so complex and epic that we'll be talking about it for some time. The entire consequences of what has happened will only be revealed in time, but in this 4-Part special overview, analysis and predictions I will reveal to you everything that happened, dispel the silly and ignorant rumors and gossip circling around the Western MSM, and provide my long-term Earth Shift analysis and predictions. What does all this mean for the future of Russia and the world?
For several years now I was wondering when Putin would finally begin making these major moves of changing the constitution, reformatting the power structure and government, plus re-setting Russia's political and economic direction.
I was guessing it would be in the middle of his last term, when it's the safest to do. He did exactly that and the fact that it's done to coincide with the beginning of the new decade is especially fitting.
All these moves are designed to secure his legacy and build Russia's new, stronger foundation for centuries to come.
I personally would want him to stay in power for as long as possible. I'd love for Shoigu and Lavrov to remain much longer, too.

1. During his annual address to the Federal Assembly Putin announced major changes to the Russian Constitution, written in 1990s by Clinton advisers for Yeltsin and serving as an instrument of Western interference in Russia's affairs. The calls to re-write the constitution have been heard for years. I predicted this would happen in EARTH SHIFT WEBINAR 6: THE PUTIN ENIGMA.
All main political parties have backed Putin's proposals, which is almost unheard of!

2. PM Medvedev announced that his government is stepping down, following President Putin's announcement, saying that since the new constitutional structure is being built, a new government is needed.

3. Putin announced that the powers of the Russian president will be curtailed and the Duma's powers will increase, according to the new constitution. Therefore, the Duma can now elect and form future government.
I am sure Putin has thought about constitution and other changes for years, but the right moment only presented itself now.
While others, such as presidents of China or Turkey, only consolidate power and give themselves more time in office, Putin has voluntarily curbed the power of the Russian president.
Why diminish his powers, while giving more power to others? It's all consistent with THE PUTIN ENIGMA predictions. Putin's true selfless role is to stabilize Russia the Great Balancer, and do it quietly, peacefully and amicably, something that seemed an impossible feat before!
I'll explain everything fully in Part 3 of this report!

4. The constitution will also establish absolute presidential 2-term limit, vs. previous 'consecutive' 2-term limit, thus limiting president's lifetime term to no more than 12 years.
The president's power to appoint PM and the cabinet is now given to the Duma. President can suggest PM, but cannot appoint him/her.

5. New privileges and perks for poor families and families with kids are announced. Families with two or more kids receive very substantial financial bonuses from the state, up to a million rubles, or close to $30,000.
Free lunch for all primary school kids announced.
All this targets the resolution of Russia's severe demographic problem.

6. Putin proposed that minimum wage must be the living wage, indexed to inflation. Which means it automatically increases with inflation.

​8. For the post of the PM Putin proposed Mikhail Mishustin, the Head of the Federal Tax Service. A complete unknown to the world, who was always in the shadows. Why an unknown, why a tax man? This nomination is completely unexpected and it has been a shock to many.
Left image: ex-PM Dmitry Medvedev. Center and Right images: new PM Mikhail Mishustin
Immediately speculation started that he would only be an interim PM, replaced very soon, or that Putin is trying to diminish the role of the PM and ministers, while increasing his power. Nothing could be further from the truth and the exact opposite is true.
In reality, PM and the cabinet get MORE executive power, and the power of the Duma and its parties is growing substantially, while the president's power decreases. There is no known precedent in modern history when a sitting head of state has voluntarily decreased his/her own power. The opposite is usually true.

The real demand of the Yellow Vests in France is to decrease the power of Macron, as some French people have told me. In other countries there are similar protests, people demanding less power for the presidents and heads of state. In neighboring Ukraine, Belarus, Kazakhstan, Uzbekistan, Turkmenistan, Azerbaijan - presidents all try to grab more power for themselves.
Look what Trump is doing: almost starting wars, without asking Congress for approval, which is against the law. China removed the limit on how many years Xi could be president, and if he wants, he can now remain in power for life! Erdogan is systematically consolidating his power - he is basically a sultan.

It's only Putin who is initiating the opposite action and who's ceding part of his power voluntarily. It takes a very special kind of person to do that!

But the end result of Putin's actions will be tremendously beneficial! This will greatly strengthen the Russian state and give it more stability in the future. Putin's unprecedented move confirms in spades all my predictions made in previous years regarding Putin's role of resetting the world for the new millennium and the Aquarian Age, strengthening and fortifying Russia the Great Balancer so it could fulfill its leading role in the 21st century, according to Edgar Cayce and Baba Vanga prophecies!
​
This is the Time of Russia and Earth Shift! If you are new, for my detailed narrative and predictions on this topic see:

9. New PM Mishustin, 53, is a rich man himself, and he has created the world's best automated tax collection system, lauded by everyone. Russian revenues are up greatly. Russia is practically the world's only country, or one of the very few, where 96% of people are happy with the tax system and gladly pay their taxes.

Mishustin was almost unanimously confirmed as interim PM by the Duma, the only ones abstaining were the Communist faction. They explained that they didn't know the actual composition of the government and therefore couldn't vote. 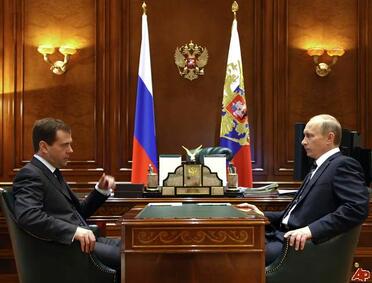 11. The present government will continue its caretaking duties and supervision of the country till new government is formed by the Duma.
​
12. Putin and the Duma also agreed that there will be some sort of popular vote or informal referendum to make sure people approve  the changes. Based on initial reactions, the vast majority approves!
The constitutional changes will go through some time this year, anywhere between March and September.
ADDENDUM!
The new government was formed in record time and is already functioning. This also was a great surprise to the world, as this process was expected to last longer. This confirms what I said in Part 3 of Earth Shift Report 28: PUTIN'S Secret MASTER PLAN & RUSSIA AFTER PUTIN! The Great Balancer & World Future REVEALED! P3 (Earth Shift Report 28)

This was a pre-planned move and the new PM Mishustin had thought about who would be in his government beforehand. For him, as well as for some key people in the Russian Duma, Russian and Moscow City governments, this wasn't a surprise. It wasn't a surprise to Lavrov, Shoigu and to the powerful Mayor of Moscow, Sobyanin. The reason it's clear is their body language and behavior. As to the Mayor of Moscow, we know he knew because some of the key members of his team, who made Moscow in the past two years the world's most attractive city and No. 1 tourist destination, made it into the new government.

**Read/watch this free post on FuturisTrendcast blog: The Magical & Awe-Inspiring City of Light! Moscow Celebrates New Year 2020! and it will tell you what Moscow looks like now, after it was transformed by Sobyanin and his people.
​P2 - video narrated by Lada Ray
​
Putin's Peaceful REVOLUTION! New Constitution, New Government, New Russia + What's with Lukashenko?
39 MIN TOTAL VIEW TIME

Complete in-depth analysis, intel and my predictions regarding Putin's January 2020 PEACEFUL REVOLUTION! This is the real truth, not that drivel and lies based on jealousy, hatred and low calibrations you often hear in the West. The West is scared of Putin and Russia for a very good reason. Putin outplayed them every single time, and he's done it again. And he is doing it without sacrificing his principles, lying or cheating; without changing his views depending on where the wind blows. They know they are nothing compared to him, and they are very scared the world will see that clearly. This is why they try to vilify him every chance they have, but no one who has half a brain believes their lies any more. READ COMPLETE SUMMARY HERE. ​
​New and old faces of the NEW Russian government, why it's highly lauded and called the 'meritocracy' government.
We discuss the composition of the Vice-PM (vice-Premier) corps and key ministerial positions.
Lavrov and Shoigu are back - what does it mean?
What is so remarkably different about this government and why it's called the 'Government of Growth.'
Another word about Putin's successor. Will it be Shoigu, or?..
What is really Putin's secret strategy and how does he think?
Another revolutionary development: potential increase of the role of previously dormant State Council and Security Council!
​
BONUS IMAGES: 1-2 New Russian Government; 3 FM Sergey Lavrov with Trump; 4 Putin and Shoigu
REFERENCE